How to Create a Workflow

A workflow template is simply a visual representation of a series of workflow steps, laid out and connected in the order they will be executed in order to complete a business process. Usually involving multiple people. Like a cookie cutter, once created, a workflow template is then used to create actual workflow instances. These workflow instances and their tasks are what your users will interact with to complete their work.

In Flowmingo, workflow templates are created using our drag and drop, visual Workflow Process Designer. Tasks are created, users assigned and then connected in the correct order. After creating a workflow template the process creator will decide which users will have access to start a workflow. The last step is for the process creator to publish the template before it can be used.

The published workflow will now appear in the "Start Tab" for your users.

Starting Tasks: Starting tasks signify where a workflow will start. A workflow may have more than one starting task

Decision Tasks: A decision task is a task that prompts the user with a true/false, yes/no type of question and is represented in the workflow designer by a diamond shape. Based on the response, the workflow will branch off into one of two different directions. Decision tasks also serve as the starting and ending point for loops.

Action Tasks: Action tasks will start another, asynchronous linked workflow when reached. The child workflow runs independent of the parent workflow. They can be completed, placed on hold, cancelled or deleted just as a normal workflow would.

Timer Tasks: Timer tasks are used to automatically "pause" a workflow for a set period of time before the next step is executed.

Normal Tasks: Normal tasks are the work horse tasks of Flowmingo and will make up the majority of your workflow tasks. These tasks are flexible enough to act as starting and ending nodes in simple workflows where all tasks are required to completed.

Linear Task Workflow ProcessesA linear workflow is the most basic workflow. It's just a series of tasks that will be completed one after another until the final task is completed. At which point, the workflow is considered completed.

A linear workflow is completed when all the tasks are completed.

Parallel Task Workflow Processes Parallel Tasks will usually split off of a common parent and then run concurrently.

Branching Workflow Processes A decision tasks is a task that prompts the user with a true/false, yes/no type of question and is represented in the workflow designer by a diamond shape. Based on the response, the workflow will branch off into one of two different directions.

A starting and ending task are required when using a decision task in a workflow. The workflow may contain multiple ending tasks, but the workflow will end upon reaching an ending task.

Loop Workflow Processes Loops are controlled by decision tasks. A loop will always begin and end with a decision task 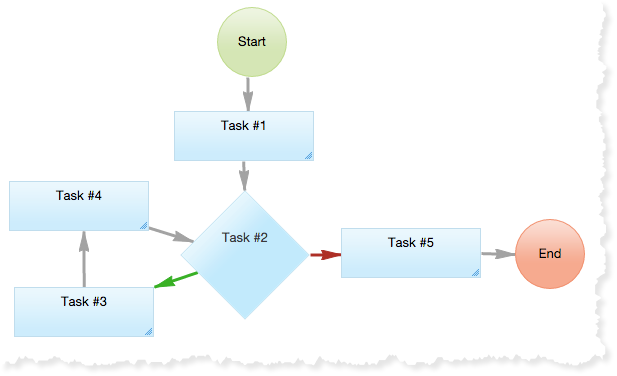 Loops vs Reject Action Flowmingo has the notion of rejecting back to a prior task. Sometimes a task is completed by mistake while other times the task was not completed correctly and the next task can not proceed. This has the effect of loop and in many cases can replace a "formal loop". Consider this example. 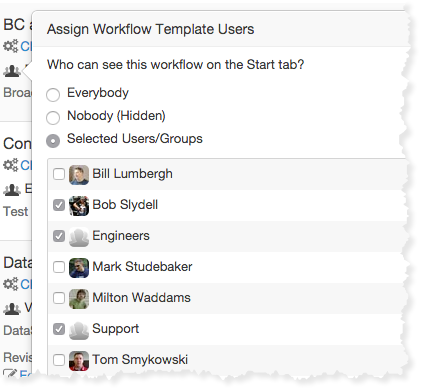